Oscar is a dedicated footballer having played at the highest state level from an early age. He started at Kahibah FC in Newcastle before being scouted to junior representative football for Newcastle-Port Stevens. Following this he was brought into the Emerging Athletes program and later played for Northern NSW Institute of Sport (now Newcastle Jets Youth). Whilst playing he then went on international tours playing against some of China's best. He left NSWIS to play NPL1 for Hamilton Olympic until he relocated to the Central Coast where he has represented Gosford in 1st Division and recently has been playing an important part for Central Coast United.

Oscar has a great passion for football and has exhibited this in his footballing career and through coaching multiple youth teams, obtaining great results on the pitch and in player growth. He is a qualified grassroots coach and will be working towards becoming a FFA accredited coach in the future to further develop his talents and further develop the youth at Gosford City Football Club.

Working with Oscar is Jacob Jones who is a passionate coach and footballer that has played at NPL2 level and has multiple community coaching qualifications with a desire to pursue AFC coaching badges. Jacob runs his own academy with Oscar with the goal of making quality football coaching available to anyone on the Coast. He is excited to be working with Gosford FC to help improve the quality of player that is coming up through the ranks and help them adapt seamlessly into grade football later in their career.

To be selected for the Academy, players must go through a grading process over two sessions to be held on

Any player interested in being a part of our FREE Academy, please contact our Club Coach, Dylan Rains on 0425 348 723 or This email address is being protected from spambots. You need JavaScript enabled to view it. to register your interest! 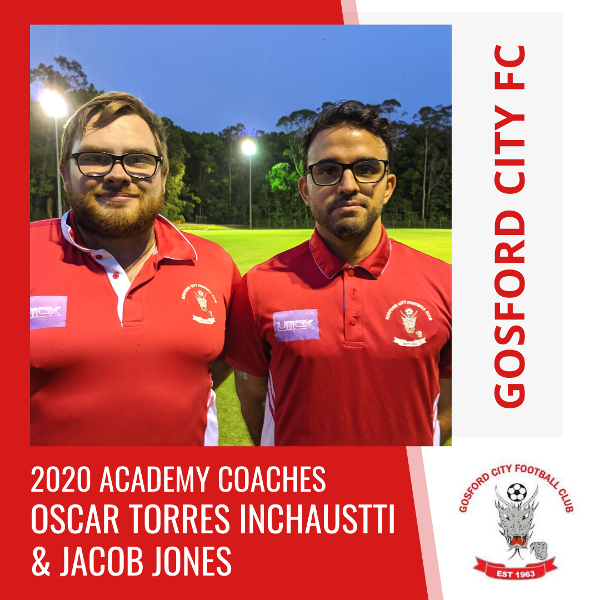