Playing football at Gosford City Football Club is a great way for your kids to stay fit, and learn key life skills in a safe, fun team environment, with guidance from qualified coaches.

The Dragons offer age groups across our Youth program from Under 12′s to Under 18′s, and caters for all ability levels, from those wanting to have fun with their friends, to those who dream of the big time!

Whether players choose to play in the Mixed Youth or Women's youth competition is personal choice and each option is equally supported by Gosford City FC. We want our female players to be comfortable and happy- and so support their ability to choose which competition they play in.

HOW WE CREATE TEAMS

You can choose whether you wish to have your child placed into a team based on their relative skill level, or you can choose to play with friends and/or a specific team.

We hold grading days for our under 9's to under 18's- IT IS A REQUIREMENT THAT ALL PLAYERS ATTEND GRADING. At grading players can be graded individually to be placed in a competitively graded team, or those players wishing to form their own team can have their team graded to ensure they're playing in the correct level of competition for their teams overall skill level.

For those wanting to play with friends and create their own team these are the numbers of players that are required:

We aim to have our teams created at the beginning of March, teams must be submitted to Central Coast Football for inclusion in the competition by March 10th. Registrations can be accepted after that date but only where we have an available spot in a team. We encourage those wanting to invite friends to play to do so early to ensure they don’t miss out.

PLEASE NOTE- FOR PLAYERS WANTING TO PLAY UP AN AGE GROUP: All requests to play in a different age group than your child’s birth year age group need to be made to your relevant Football Manager. The club must assess each request individually to ensure player safety and fairness to all our teams. We will wherever possible accommodate requests. Players wanting to play up in a team in under 9’s and over must attend grading- for both their actual age group and the age group they want to play in.

Our Under 18's Pre-season Training will be run by Gosford City’s Club Coach, Gavin Drummond.  Gavin was the Coach of the 20’s side last Season and has had over 15 years experience in Youth Football Coaching.  Gavin has completed 4 x FA approved Community and Advanced Coaching Licences, and he has assisted CCF as a Coach Instructor (with FNSW’s Approval for one Course).

Gosford City is seeking a Coach for the 18’s Squad to train once a week and run Game Days.  We are also seeking Players of an A & B Grade standard.  The 18’s will have a strong ongoing interaction with the 20’s, with players from both Squads potentially eligible for BPL 21’s next season.

Preseason Training will be held on Tuesdays and Thursdays at Narara Valley High School between 5.30pm - 7pm (unless notified otherwise).  Players do not have to be registered with Gosford City to attend Training.

All 18s Coach and Player Enquiries to Cam Bradley (Football Manager Youth) on This email address is being protected from spambots. You need JavaScript enabled to view it. or 0412 571 654.

We look forward to having you as part of our community!

CLUB COMMUNICATIONS DURING THE SEASON:

Our club communications are sent out from 'Stack Team App', this is an app which is free for our club to use- which offers us many features and means our messages can get directly to you. We're asking that all parents of players and players please download this app to ensure that you are aware of what is happening this season.

We are also active on social media, both Facebook and Instagram, but these are more community based  rather than internal club information so it is necessary to be on the 'Stack Team App' so you get everything relevant to you. We do hope to see you on our social media too though!

Below is a quick how to join us on Stack Team App, you can also add it on your phone via the App Store. 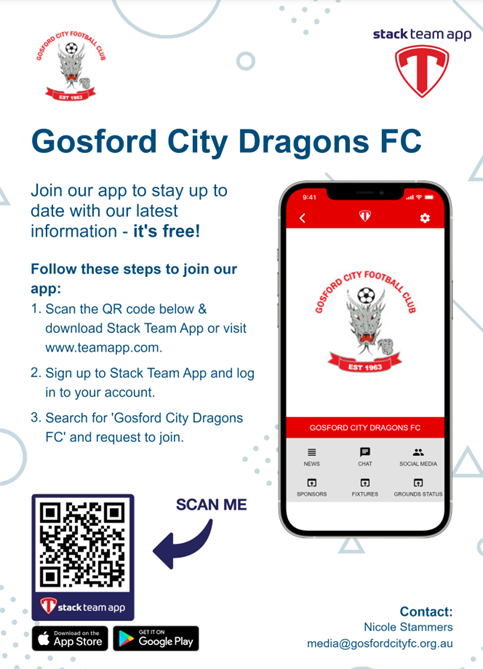